The cooperative sector, based on a 19th century model of shared ownership, is undergoing a reinvention in the post-financial crisis world

At the Arizmendi pizza shop in San Sebastian one Tuesday in April, around half of the stools at its high chipboard tables were occupied. The restaurant’s interior is atypical for a pizzeria – there’s not a checked tablecloth in sight. Instead, the restaurant inhabits a vast space in the Tabakalera cultural centre, done out in minimal-industrial style, with sandblasted concrete floors.

The pizza is good. Opened at the beginning of the year, Arizmendi offers its customers only one choice of topping each day. ‘Pies’ are available by the slice or in their entirety.

Behind the apparent simplicity of the product is an unusual business model. The pizzeria is set up as a worker’s co-operative, based on the Basque Country’s gargantuan Mondragon Corporation.

Founded in 1956 as a manufacturer of paraffin heaters by the Jesuit priest José María Arizmendiarrieta, Mondragon has diversified considerably and grown to become the country’s seventh largest industrial group. Yet, while ‘Arizmendi’ is a contraction of Arizmendiarrieta’s surname, San Sebastian’s realisation of the Mondragon model took a surprisingly route into being.

“It did seem a little backward when they came to us to ask for permission,” says Sue Lopez, co-founder of one of a chain of five Arizmendi bakeries in the San Francisco Bay Area. “Of course we gave our approval – and one of our former bakers helped them set up in the same style as us.”

Launched in 1997, the Californian Arizmendi chain is a successful export of the decentralised Mondragon model. Each of its five branches is run as a separate business that pays fees into a central Development and Support Co-operative, or DSC.

In return, the DSC provides backroom services, such as staff training and accounting assistance. Workers are paid the same salary regardless of length of service, at a rate that is deemed sustainable by each bakery.

Profits are then divided equally between workers through an annual dividend. For Lopez, with benefits, this averages out to roughly $40 (£27) per hour, and comes with seven weeks annual holiday. Not bad for food service in California, where hourly rates can be as low as $7 – and there is no statutory holiday allowance.

Many believe co-operatives like Arizmendi are due a renaissance. Since the 2008 crash, consumers have grown sceptical of traditional capitalist models. They welcome alternatives perceived to be ‘fair’ and ‘sustainable’ – and are hyper-aware of their spending power. Co-operatives have benefitted from this shift in attitude, with the sector recording 22 per cent growth between 2008-2013, as the rest of the economy flatlined. An unprecedented 17 million Brits are now members of a co-operative – be it a credit union, housing coop or worker collective.

Yet, the advent of the ‘sharing economy’ has placed the sector on a knife-edge. Companies such as Uber, Airbnb, and Funding Circle have been heralded for bringing about a revolution in business, providing ‘platforms’ that allow holders of goods or services to ‘share’ them directly on the marketplace. The egalitarian payment structures of these companies, some say, could introduce even more consumers to the co-operative model. Alternatively, it may make the very notion of ‘shared ownership’ obsolete.

While it has found stable ground in northern Spain and California, the co-operative movement began life on the outskirts of Manchester. In 1844, a group of Rochdale tradesmen, priced out of purchasing basic foodstuffs by the mechanisms of the Industrial Revolution, founded a shop selling butter, sugar, flour, oatmeal and candles. They called themselves the Rochdale Society of Equitable Pioneers, and their business was the first to pay a patronage dividend.

“People want more control over the businesses they use”

By the end of the 19th century, there were around 700 regional retail co-operatives. These were gradually consolidated into 12, with the Co-operative Group being the largest and best-known. John Lewis, the sector’s other household name, differs from most other co-ops for being owned by its workers rather than its customers. The latter half of the 20th century proved tough for the sector, with growing competition from chains such as Tesco leading to a substantial fall in market share.

However, Ed Mayo, secretary-general of Co-operatives UK, is optimistic. Pointing to Emilia Romana in northern Italy, he expresses hope that the sector could one day match that found in the prosperous industrial province and make up 10 per cent of the UK’s economy. “Evidence shows that people want more control over the businesses they use,” he says.

The motor for this growth, he believes, will be customers seeking out alternative forms of capitalism. “People associate co-operatives with being local, trustworthy and fair. These are drivers for people choosing to use co-ops, for choosing businesses owned and run by the people closest to them.”

This popularity, and the model’s resilience in the wake of global economic meltdown, led to it being courted by suitors from across the political spectrum. In 2010, the coalition government toyed with the idea of turning public services into public service mutuals, while in April, shadow chancellor John McDonnell pledged to double the number of co-ops in the UK if Labour takes power.

In our brave new digital world, the sector is presented with abundant opportunities – and novel challenges. A new class of laptop-ready freelancers has emerged while swathes of workers are finding themselves self-employed due to the ‘casualisation’ of labour markets, brought on in part by the advent of the internet. Around 15 per cent of the UK workforce is now self-employed. Around the world, these newly minted freelancers are setting up a new wave of co-operatives to provide their backroom services, in much the same vein as Arizmendi’s DSC.

Optimists say that the rise of the sharing economy may have allowed a central principle of the co-operative movement in through the backdoor. Ranging from community tool libraries catalogued online, to billion-dollar corporations such as Uber, Airbnb and Funding Circle, a range of digitally enabled organisations fall under the ‘sharing economy’ umbrella. In leaving the vast majority of wealth in the hands of its creators, these organisations give life to a fundamental co-operative principle.

However, critics argue that any similarities between the co-operative model and the sharing economy are skin-deep. The latter’s utopian visions has quickly been co-opted. Most of its constituent businesses are owned privately or by shareholders. The vision of an empowered, united community ends with their marketing departments. And in a practice known as ‘sharewashing’, unreconstructed companies are doing all they can to fool consumers into believe they have embraced its ideals.

Yet, a model that allows its members to retain anything up to 97 per cent of the wealth they create may negate the need for co-operatives – and eventually supplant them altogether. Arun Sundararajan, professor of Information, Operations and Management Sciences at New York’s Stern School of Business and author of The Sharing Economy: The End of Employment and the Rise of Crowd-Based Capitalism, believes that the question of who owns a company is becoming a red herring.

“If millions of people are elevated from ‘provider of labour’ status to ‘owner of business’ status, this can have only an equality-enhancing effect”

“While Airbnb may be a shareholder corporation, and there may be a few billionaires created by it, it doesn’t take away from the fact that there is still shared ownership,” he says. “It’s just shared ownership of the means of production – the businesses that host customers – rather than of the core company itself.”

The efficiency of this model may prove tricky to challenge. Airbnb takes between 3 and 15 per cent of its host’s revenue. “I think most people would be very happy if they could capture 85 per cent of what they generated,” says Sundararajan. “I know I would.”

Challenging Co-operative UK’s assertion that jointly owned enterprises are the best alternative to conventional capitalism, Sundararajan refers to Thomas Piketty, the hugely influential economist whose book Capital in the Twenty-First Century has perhaps shaped the understanding of the global economic landscape more than any other in the years since the 2008 crash.

“Piketty wrote about how inequality has persisted for the 200 years since the Industrial Revolution because business owners get faster returns than their labourers,” Sundararajan says. “But if millions of people are elevated from ‘provider of labour’ status to ‘owner of business’ status, this can have only an equality-enhancing effect.”

What’s more, having a shareholder model at the core of a business has advantages when it comes to raising capital or paying staff of differing skill levels.

“If you’re building software, there could be one programmer who’s a thousand times more valuable than everybody else. In a workers’ co-operative, chances are that person will turn around and say ‘I want more than one divided by the number of people who are in this entity,” Sundararajan says.

However, there may still space for co-operatives in the sharing economy: Resonate, a music service, similar to Spotify; Stocksy, a paid-for stock photo catalogue; and Fairmondo, an online marketplace for goods and services, are all existing examples of co-operatively owned sharing platforms.

The taxi industry, Sundararajan believes, could soon provide another. “Workers are contributing in proportion to the amount of time they spend,” he says. “It’s not like one taxi driver is 100 times more valuable than the others.” It is also a business that economists call ‘contestable’ – a new platform would need just a few thousand drivers to sign-in, rather than the millions of users to make a business like Facebook viable.

Like many small businesses in the Bay Area, the Arizmendi bakeries are contending with the existential threat of rising rents, largely caused by an influx of new money from Silicon Valley. Whether or not this is a harbinger of things to come, the co-operative model seems safe for now. Where workers contribute roughly equal value – as bakers or taxi drivers do – the model is still valid. But, with Uber raising its share of revenue to 35 per cent in some cases, co-operatively owned competitor platforms have emerged in Portland and Denver. Beleaguered cabbies in London, Berlin and New York should take note. They could yet call out Uber on its surge pricing – and beat it at its own game. 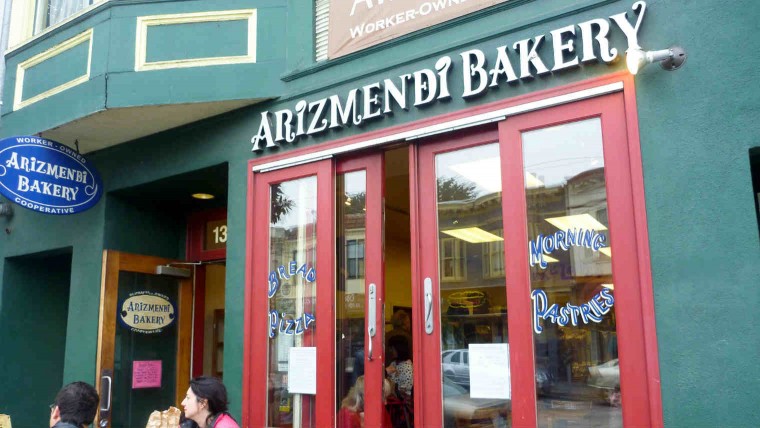